The Mexican Film Macario & My Uncle the Projectionist 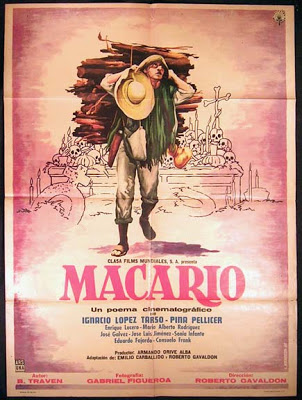 The Mexican Film Macario & My Uncle ...

When I was a little girl, my uncle worked as a cinema projectionist, operating the movie projector in a local New York City movie theater. Whenever, I visited my grandparents, especially during the holidays, he would bring out his old movie projector and show films right onto the back wall of the house for all of us, young and old, to see together. It was great and I have so many happy memories of these special private screenings.

One movie we saw that has always stuck in my head was Macario (Mexico, 1960). The story of Macario, a poor starving mexican woodcutter, who dreams of eating a whole roast turkey by himself. It weaves a tale of magical realism, in which encounters with the Devil, God, and Death with unexpected results. It is based on the novel The Third Guest by the writer known as B. Traven. The first Mexican film to be nominated for an Academy Award for Best Film in a Foreign Language, Macario is a must-see.


It’s funny because I never thought these private family screenings out of the ordinary or especially cool back then but now I look back and see how my upbringing shaped me (my love of the arts, culture and media, technology, and foreign language cinema) and how very lucky I am.