REBEL: A Woman In Battle 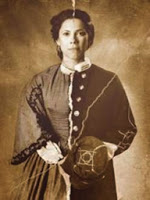 REBEL: A Woman In Battle

Rebel, a new documentary explores the Secret Life of Loreta Velazquez — Cuban immigrant, Confederate Soldier turned Union Spy. REBEL will premiere in New York on WNET on Sunday, July 21 at 7PM or you can watch the full length film here.

REBEL is based on Loreta’s 600-page memoir, A Woman In Battle, which caused a sensation when it was published in 1876 and remains in print to this day. For over a century, Loreta was dismissed as a liar and a prostitute, but new evidence indicates she was no hoax.


“Loreta’s memoir gives us rare insight into war from a woman and a Latina’s point of view. She was an immigrant serving her country by fighting for it, as so many generations have done. Growing up in New Orleans she naturally aligned herself with the South and even kept a slave, but records show she would end up spying for the North.

She was a complex woman who ultimately turned against war as a solution to the world’s problems,” says writer/director María Agui Carter. Although Loreta’s memoir, which most historians acknowledge to be somewhat embellished, was dismissed as a hoax for over a century, historians have recently discovered documents in the National Archives as well as newspaper articles and letters proving that she did indeed exist. “Loreta Velazquez was a rebel who flouted all the rules to become a part of American history,” says Ms. Agui Carter.