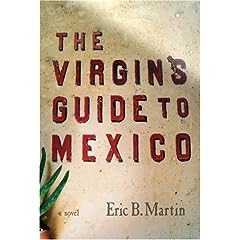 The Virgin’s Guide to Mexico by Eric B. Martin

Alma deferred her freshman year at Harvard hoping to go to Spain, only to have her parents insist that if she doesn’t go off to Harvard, she enroll at the University of Texas. Instead, Alma is determined to figure out how her chilly, beautiful Mexican mother, Hermelinda, managed to transform herself from a maid’s daughter into a rich dot-com wife.

Armed with a year of Spanish, a lot of moxie and a cache of letters sent to her mother by her grandfather from Mexico City, Alma chops off her hair, assumes the moniker ‘The Kid’ and joins a gang of young American men headed for the border whorehouses. Alma’s perspective emerges in a winning torrent of observations, and though a transvestite prostitute discovers her secret, she makes a pretty good boy.

books The Virgun's Guide to Mexico