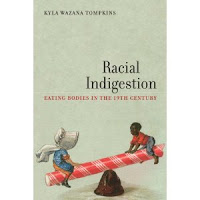 I’m sooo reading this: Racial Indigestion: Eating Bodies in the 19th Century – because it totally relates to my comments here. 
Racial Indigestion explores the links between food, visual and literary culture in the nineteenth-century United States to reveal how eating produces political subjects by justifying the social discourses that create bodily meaning.


Less a history of commodities than a history of eating itself, the book seeks to understand how eating became a political act, linked to appetite, vice, virtue, race and class inequality and, finally, the queer pleasures and pitfalls of a burgeoning commodity culture. In so doing, Racial Indigestion sheds light on contemporary “foodie” culture’s vexed relationship to nativism, nationalism and race privilege.


Kyla Wazana Tompkins is an Associate Professor of English and Gender and Women’s Studies at Pomona College. She is a former journalist and restaurant critic.