New Book: The Distance Between Us: A Memoir By Reyna Grande 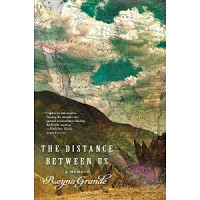 New Book: The Distance Between Us: A Mem ...

My coworker who is a graphic designer walked by my desk as I was writing this one late evening and stopped short to tell me she loved the cover of The Distance Between Us: A Memoir By Reyna Grande. Now if that’s not a compliment to one designer from another, I don’t know what is.


Reyna Grande is the author of two award-winning novels. Across a Hundred Mountains received an American Book Award, and Dancing with Butterflies was the recipient of an International Latino Book Award. Reyna lives in Los Angeles. Mago pointed to a spot on the dirt floor and reminded me that my umbilical cord was buried there. “That way,” Mami told the midwife, “no matter where life takes her, she won’t ever forget where she came from.”


Then Mago touched my belly button . . . She said that my umbilical cord was like a ribbon that connected me to Mami. She said, “It doesn’t matter that there’s a distance btween us now. That cord is there forever.”


When Reyna Grande’s father leaves his wife and three children behind in a village in Mexico to make the dangerous trek across the border to the United States, he promises he will soon return from “El Otro Lado” (The Other Side) with enough money to build them a dream house where they can all live together. His promises become harder to believe as months turn into years. When he summons his wife to join him, Reyna and her siblings are deposited in the already overburdened household of their stern, unsmiling grandmother.


The three siblings are forced to look out for themselves; in childish games they find a way to forget the pain of abandonment and learn to solve very adult problems. When their mother at last returns, the reunion sets the stage for a dramatic new chapter in Reyna’s young life: her own journey to “El Otro Lado” to live with the man who has haunted her imagination for years, her long-absent father.

In this extraordinary memoir, award-winning writer Reyna Grande vividly brings to life her tumultuous early years, capturing all the confusion and contradictions of childhood, especially one spent torn between two parents and two countries. Elated when she feels the glow of her father’s love and approval, Reyna knows that at any moment he might turn angry or violent. Only in books and music and her rich imaginary life does she find solace, a momentary refuge from a world in which every place feels like “El Otro Lado.”


The Distance Between Us captures one girl’s passage from childhood to adolescence and beyond. A funny, heartbreaking, lyrical story, it reminds us that the joys and sorrows of childhood are always with us, invisible to the eye but imprinted on the heart, forever calling out to us of those places we first called home.