#FridayReads: The Beat of My Own Drum by Sheila E. 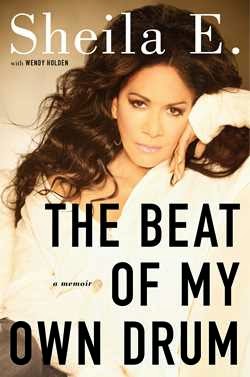 #FridayReads: The Beat of My Own Drum by ...

Out this week is “The Beat of My Own Drum” a memoir from Sheila E.

From the Grammy Award–nominated singer, drummer, and percussionist who has shared the stage with countless musicians and is renowned for her contributions throughout the music industry, a moving memoir about the healing power of music inspired by five decades of life and love on the stage.


Sheila E., born Sheila Escovedo in 1957, picked up the drumsticks and started making music at the precocious age of three, inspired by her legendary father, percussionist Pete Escovedo. Two years later, she delivered her first solo performance to a live audience. By nineteen, she had fallen in love with Carlos Santana. By twenty-one, she met Prince. The Beat of My Own Drum is both a walk through four decades of Latin and pop music—from her tours with Marvin Gaye, Lionel Richie, Prince, and Ringo Starr—to her own solo career. At the same time, it’s also a heartbreaking, ultimately redemptive look at how the sanctity of music can save a person’s life. Having endured sexual abuse as a child, Sheila credits her parents, music, and God with giving her the will to carry on and to build a lasting legacy.


Rich in musical detail, pop and Latin music history from the ’70s and ’80s, and Sheila’s personal story, this memoir is a unique glimpse into a drummer’s singular life—a treat for both new and longtime fans of Sheila E. And above all, it is a testament to how the positive power of music serves as the heartbeat of her life.


Emmy and Grammy Award–nominee Sheila E. is one of the most talented percussionist/drummers in the world, performing and/or recording with Prince, George Duke, Herbie Hancock, Billy Cobham, Con Funk Shun, Marvin Gaye, Diana Ross, Lionel Richie, Ringo Starr, Hans Zimmer, and countless others. She maintains a heavy involvement in charitable organizations as a philanthropist by promoting music and arts education as an alternative form of therapy.