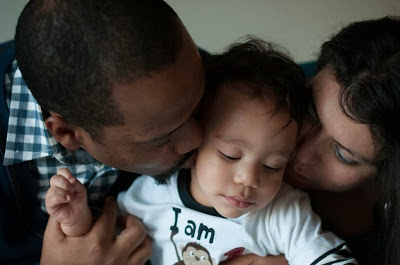 I recently asked fellow blogger, Jose Vilson (@TheJLV), his thoughts on Machismo, Fatherhood and the how the transition into becoming a “family man” changes you as person.

Here’s Jose in his words:

Fatherhood isn’t just a badge or something that happens when our children are born. It’s a way of life.

When my child was first born, and he shook the room with his first cries, I knew I was in for an awesome life-long journey. Within the first few days, he already peed on me, vomited on me, and pooped on me, which was a lesson in humility. It’s as if a divine spirit said, “The things you thought would normally offend you are a natural part of your baby’s growth. Love him anyways.” So I did, and then some. Within the first few months, you’re inundated with sleepless nights, diaper changes, and multiple places for your baby’s sleep, including the couch, your bed, his bed, your leg, your chest, and anywhere else that the baby deems soft.

When people say, “Everything changes,” and it’s absolutely true. I push myself harder to do right in everything I do because I have a child now, and the stakes are higher. Having a child means my schedule revolve around my son now. Gone are the days of spontaneous happy hours and movie premieres. Yet, I’m glad I gave it up for the running around, the laughter, and Mickey Mouse Clubhouse viewings. I find myself doing Dora the Explorer impressions because my son thinks it’s funny.

The thing I’ve noticed with my fatherhood is that I didn’t have my father growing up too much. I saw him on average once a year. While I’ve come to peace with his role in my life, I also know I wanted to do better. Being there for my son, even when I have to handle other responsibilities, is priority #1. He doesn’t have too many words in his vocabulary, but making sure he knows I love him. He has lots to learn, and I’ll be there for those lessons.

He has a great mother, and I appreciate the way she loves and cares for him. What I needed to do is create a new fatherhood, one that I hadn’t seen before, and that would match what she was trying to do and then some.  It’s a beautiful thing and I’d never turn back the clock on any of this experience.

Jose Vilson is a math educator, writer, and activist in a New York City public school. You can find more of his writing at thejosevilson.com and his book, This Is Not A Test, will be released in the spring of 2014.


José Vilson writes about race, class, and education through stories from the classroom and researched essays. His rise from rookie math teacher to prominent teacher leader takes a twist when he takes on education reform through his now-blocked eponymous blog, TheJoseVilson.com. He calls for the reclaiming of the education profession while seeking social justice.