Win a Copy of Count on Me: Tales of Sisterhoods and Fierce Friendships by Las Comadres Para Las Americas & Adriana V. Lopez 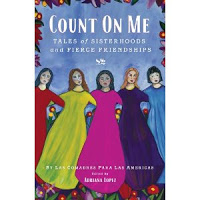 
What would you do, where would you be, without your comadre? In Spanish, comadre is a powerful term. It encompasses many of the most complex and important relationships that exist between women: best friends, confidants, advisors, neighbors, and godmothers to each other’s children.


For over a decade, Nora Comstock, President and CEO of the international organization Las Comadres Para Las Americas has been bringing Latina women together to support each other in the U.S. and overseas. Here, they collaborate with acclaimed author and editor Adriana Lopez to bring you the very best of today’s Latino writers as they illuminate the power of sisterly bonds.


In twelve creative nonfiction narratives, mostly by women, the authors reflect on the importance of comadres in their lives. Writers like Fabiola Santiago, Luis Alberto Urrea, Reyna Grande, and Teresa RodrÍguez tell their stories of survival in the United States and in Latin America, where success would have been impossible without their friendships.


Favorites like Esmeralda Santiago, Lorraine Lopez, Carolina De Robertis, Daisy Martinez, and Ana Nogales explore what it means to have a comadre help you through years of struggle and self-discovery. And authors Sofia Quintero, Stephanie Elizondo Griest, and Michelle Herrera Mulligan look at the powerful impact of the humor and humanity that their comadres brought to each one’s life, even in the darkest moments.”

Nora de Hoyos Comstock is the National and International Founder, President, and CEO of Las Comadres Para Las Americas, an international organization that has been bringing together thousands of Latina women for more than a decade to support and advise one another.


Adriana Lopez is the author and editor of several books. Her work has appeared in The New York Times, Los Angeles Times, and The Washington Post, among other publications. She lives in New York and Madrid.

I have an extra ARC copy that I received in error and I would like to raffle it off to an interested reader. The book will be published by Atria on September 4, 2012, and will retail for $16.00. Please note this is a pre-release copy and not a finished book.

Please enter below for your chance to win. The winner will be chosen randomly via the Rafflecopter algorithm and will be contacted via email.