Want to Design your own Fitbit Band? Let’s make it happen! 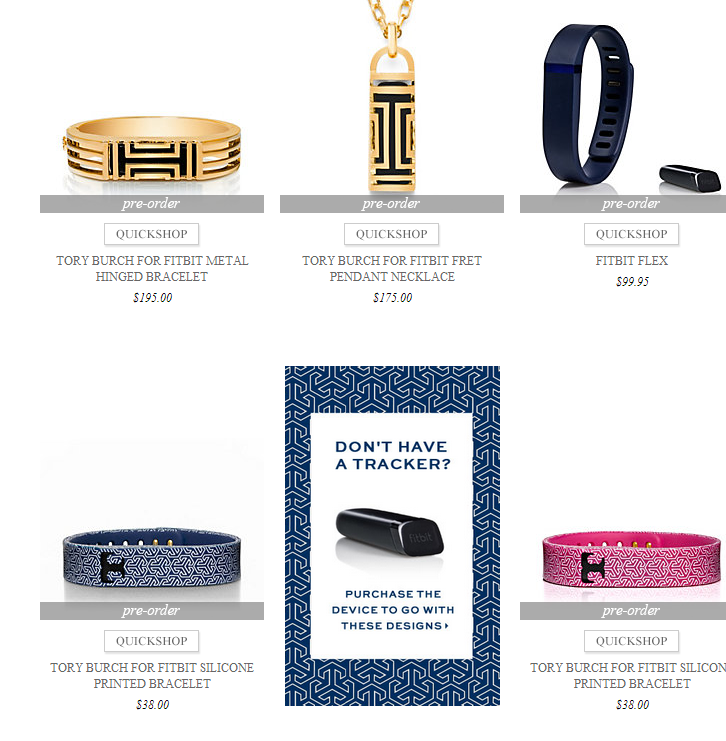 Want to Design your own Fitbit Band? Let ...

Fitbit recently announced their collaboration with designer Tory Burch offering a pendant, print silicone band or a metal hinged one. As a Fitbit owner, I was relieved to hear that they finally offered users of their wearable tech, a few options outside of the standard unappealing silicone band available only in a few solid colors.

My excitement was quickly squelched because the new line is really limited in variety and the most stylish, the pendant and the metal band, cost even more than the actual tracker costs.

Did Fitbit Miss the Mark?

Another thing of note for Fitbit is that the Tory Burch aesthetic isn’t exactly suited for everyone. While Tory Burch’s mission to be a “luxury brand defined by classic American sportswear with an eclectic sensibility and attainable price point” seems on point, her Soccer Mom, BabyBoomer consumer demographic with sky-high credit limits;, echoed by her somewhat cultish and basic New-York-City-uniform following, is a turn off.

Was this just a strategic play to go after this market by Fitbit rather than fulfilling the needs of their dynamic user base?

It makes my head spin a bit if so. Did your marketing and design team do their homework?

While colossally plugged-in and influential Millennials and Gen Z crave the ability to go against the grain – design, own and make their own mark in the world in order to stand out, this offering seems to be in exact opposition to this global trend. Are we just not important? I know health, fitness, and wellness are incredibly important to many of us who track our goals, sleep, food and exercise because we want to be a better person in a better world.

I love to express myself visually. I change my style, hair, makeup constantly. I want either an accessory that is timeless and classy – a neutral that will go with everything or I want the ability to change out what I am wearing easily and not break the bank. My ideas for a fitbit band? A white silicone one, a woven thread or leather one, an interchangeable pendant that wasn’t so conventional. Maybe even something more retro, steampunkish or vintage like verdigris or something dainty and delicate. I mean, I have ideas, lots of them!

And what about more fashionable options for men? In the past couple of years, there has been an upswing in what marketers are referring to as “Yummies” or Young Urban Males who are super trendy and love to shop.

I would love to see a future offering that allows for creative, inspired individual expression for all Fitbit users.

I think a collaboration with a Quirky-like crowdsourcing or Constrvct platform, where inventive and creative users can submit their own designs and ideas for accessories could take Fitbit to the next level. Why not just open it up to all your fans?
Imagine a studio for your consumers, powered by their designs that produces amazing, ingenious designs produced by a global tribe of techies who wear, share and advocate for fitbit. A golden, win-win opportunity to profit if you ask me.
I hope you’re reading this, Fitbit, folks.