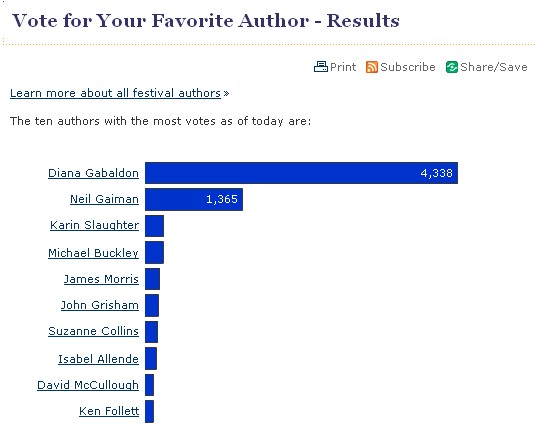 The 10th annual National Book Festival, organized and sponsored by the Library of Congress, will be held on Saturday, Sept. 25, 2010, on the National Mall in Washington, D.C., between 3rd and 7th streets from 10 a.m. to 5:30 p.m. President Barack Obama and Michelle Obama are honorary chairs for the event. The festival, a celebration of the joy of reading for all ages, is free and open to the public.

The website for the 10th annual National Book Festival, organized and sponsored by the U.S. Library of Congress, features “vote for your favorite Book Festival author.” Book-lovers will be able to select from among the roughly 500 authors who have appeared at the nine previous National Book Festivals or will appear at this year’s festival, using an alphabetical listing or voting from the page that includes each author’s biography and photograph. The top 10 vote-getters will be displayed on the voting page, with daily updates.

“One of the ways we’re observing the 10th year of the festival, celebrating ‘A Decade of Words and Wonder,’ is to make our festival website more interactive and lively,” said Librarian of Congress James H. Billington. “We’ve had a wealth of authors at the festival, and this is one more way for their fans to show their allegiance.”

The website also has new multimedia offerings―including clips from interviews with past Book Festival authors―and a countdown clock ticking away the days, hours, and minutes remaining until the festival opens. More than 70 authors now are slated to appear at the event on Saturday, September 25, 2010. The event, free and open to the public, will run from 10 a.m. to 5:30 p.m., situated between 3rd and 7th streets on the National Mall. To learn more about the National Book Festival or to cast a vote for your favorite author, visit the festival website.