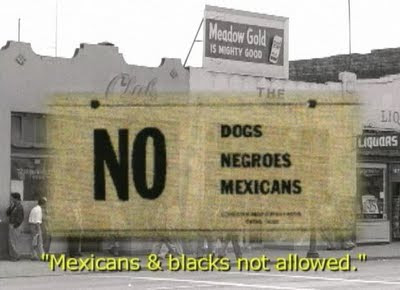 Like I mentioned before I’ve really been enjoying Season 2 of VOCES, a showcase of documentaries celebrating the diversity of Latino Life.

I watched both the Celia Cruz and Antonia Pantoja, Presente! with my mom. We both cried through the Celia Cruz one. She was so beloved by so many people around the world – it is truly amazing to me. I learned Antonia Pantoja (who I am ashamed to say I had actually never heard of before the show) was the educator who created the ASPIRA program, initiated the push for bilingual education and help open CUNY to the public.

The most recent VOCES I watched was on Braceros, who were Mexican men who came to work in the US as “guest workers” before 1960s. In one of the scenes, one of the men spoke on how they were accepted in some places and not in others and they showed this sign from a local movie theater in the 1950s (not sure about the exact date): I was taken a back by the blatant racism and also the similarity to recent signs posted in the US.

If you want to catch these great documentaries, they are available to view in full online at www.voces.tv. You can also hit them up via @VocesMedia