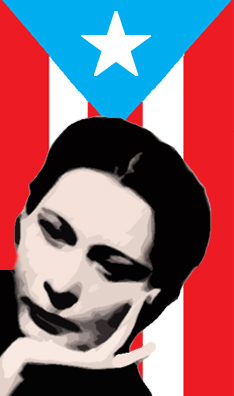 With this 26th stamp in the Literary Arts series, the U.S Postal Service honors Julia de Burgos, one of Puerto Rico’s most celebrated poets.

The stamp goes on sale in September. A revolutionary writer, thinker, and activist, de Burgos wrote more than 200 poems that probe issues of love, feminism, and political and personal freedom.

Her groundbreaking works combine the intimate with the universal. They speak powerfully to women, minorities, the poor, and the dispossessed, urging them to defy constricting social conventions and find their own true selves. The stamp features a portrait of de Burgos created by artist Jody Hewgill.

The www.washingtonpost.com put together a great slideshow of the stamps but neglected to add in Julia de Burgos’ – shame on you, WP.

Julia de Burgos (February 17, 1914 – July 6, 1953) is considered by many as the greatest poet to have been born in Puerto Rico and along with Gabriela Mistral, is considered as one of the greatest poets of Latin America. She was also an advocate for the independence of Puerto Rico and an ardent civil rights activist for women and African/Afro-Caribbean writers. She died in Spanish Harlem.