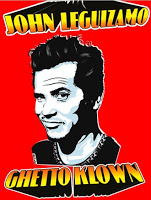 The queen of Latin soul comes alive again in this one-woman show I cannot miss and can’t wait to see.

Performances of They Call Me La Lupe began this week and run through 1/23 at Teatro La Tea in the Clemente Soto Velez Cultural Center in the Lower East Side. For more information call 212-529-1948 or to purchase tickets online at smarttix.com.

And in other exciting news, “John Leguizamo returns to Broadway with his new solo play GHETTO KLOWN for a 12-week engagement beginning previews on February 21 and opening on Tuesday March 22 at the Lyceum Theatre (149 West 45th Street). GHETTO KLOWN is the next chapter in John Leguizamo’s hugely popular personal and professional story. It follows in the unabashed, uncensored, and uninhibited tradition of his Mambo Mouth, Spic-O-Rama, Freak, and Sexaholix…a Love Story.”