Say Her Name: A Novel by Francisco Goldman

Say Her Name: A Novel by Francisco Goldm ...

I am reading Say Her Name: A Novel by Francisco Goldman and it is so beautifully written, so captivating that one cannot but help to fall hard for it.

Amidst a mass of almost propagandist media plays about what’s wrong with single women or why NYC women can’t find a man just in time for Valentine’s Day, I picked up this book written by a male novelist about the loss of his young beloved wife and I remembered that the capacity to love, to find love, to be loved, to mourn that loss, is neither male or female, but rather deeply woven into our humanity. So much so that it transcends borders and even death.

You know I rarely gush here or post personal opinions of books but Francisco Goldman has captured love and heartbreak so eloquently, so completely, so grippingly that I felt I needed to let you know about his book. 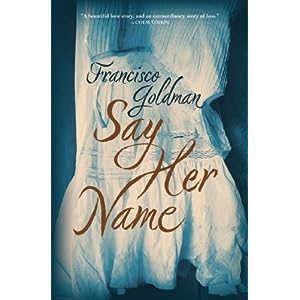 In 2005, celebrated novelist Francisco Goldman married a beautiful young writer named Aura Estrada in a romantic Mexican hacienda. The month before their second anniversary, during a long-awaited holiday, Aura broke her neck while body surfing. Francisco, blamed for Aura’s death by her family and blaming himself, wanted to die, too. Instead, he wrote Say Her Name, a novel chronicling his great love and unspeakable loss, tracking the stages of grief when pure love gives way to bottomless pain.

Suddenly a widower, Goldman collects everything he can about his wife, hungry to keep Aura alive with every memory. From her childhood and university days in Mexico City with her fiercely devoted mother to her studies at Columbia University, through their newlywed years in New York City and travels to Mexico and Europe—and always through the prism of her gifted writings—Goldman seeks her essence and grieves her loss. Humor leavens the pain as he lives through the madness of grief and creates a living portrait of a love as joyous as it is deep and profound.

Say Her Name is a love story, a bold inquiry into destiny and accountability, and a tribute to Aura, who she was and who she would’ve been.