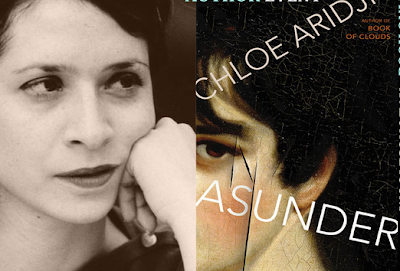 ASUNDER is a captivating novel, out now from Mariner Books, a division of Houghton Mifflin Harcourt, about two museum guards in London for whom life and art begin to overtake one another in unsettling and surreal ways.

It’s written by Chloe Aridjis, a writer who’s been praised by Junot Díaz, for her “hypnotic” prose. Chloe was born in New York and grew up in the Netherlands and Mexico, and now lives in London. She received her PhD in nineteenth-century French poetry and magic shows from Oxford, then lived in Berlin for five years. Her first novel, Book of Clouds, won the Prix du Premier Roman Etranger in 2009.

I had a chance to interview Chloe recently. Here’s what she had to say:

Chloe: England is very much home these days. Mexico is my other home of course, and I hope I’ll never have to choose between the two. I still spend around two months a year in Mexico. For daily life, I prefer London to Mexico City, however — as much as I love the latter, the soul-destroying traffic alone does me in each time I visit. I identify with each place in different ways: here, I love the tempo of the city, the weather, and the discretion. Mexico meanwhile has a tremendous dynamism and chaos that’s unique and I always feel recharged.


On the “Latina Writer” Label:


Chloe: I don’t take issue but have never identified with it myself. My mother is from New York but I definitely feel more Mexican/European since I’ve spent many more years in Europe than in the US and I suppose both my studies and movements have been more eurocentric. In general I believe identity should be fluid, and labels can be tricky.


Chloe: My father has always been an immense inspiration, as a writer and a human being. My mother’s environmental work and her intelligence and humanity are also deeply inspiring. Together they introduced me, from an early age, to literature and museums: both changed my life. I learned to read and see in new ways. As for the poets in the novel, they are based on childhood observation, mostly from poetry festivals I was taken to, and later on my correspondence with some of the poets I met.


Chloe: I write both from home and the British Library. It depends what stage I’m at, but I try to write from home in the morning and then head to the library by two or three. Different thoughts occur in different places, so it’s important to move around and see what happens where. I often get ideas on the bus over to the library. But there’s nothing quite like being here in my study, surrounded by my own books and objects and my young cat watching from the shelf behind me. ASUNDER traces the slow revolt against passivity of a female museum guard. After nine years working at London’s National Gallery, Marie starts to feel stirrings of violence as she focuses more and more on themes of decomposition in both the paint layer and the human. She is haunted by stories of the suffragettes who would attack works of art in the years leading up to WWI, and in particular by the slashing of Velázquez’s Rokeby Venus, which occurred at the Gallery in March 1914.

Her best friend Daniel is a poet who works as a guard at the Tate Britain; their lives revolve closely around their collections, public and private (Marie crafts miniature landscapes at home, Daniel corresponds with poets overseas). When they go to Paris for the winter holiday their imaginary worlds come to life in startling ways, ultimately freeing them from their former confinement.

Reminiscent of Ben Lerner’s Leaving the Atocha Station, ASUNDER is a short, powerful novel brimming with ideas and stop-you-in-your-tracks language, exploring materiality vs. spirituality, art vs. life, words vs. images, preservation vs. destruction, and those moments we all experience where we can either push something to crisis or take great pains to stop it in its tracks.

Read it and let me know what you think of it.