Our Love Affair with the President 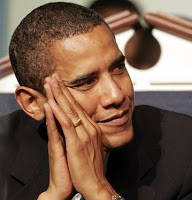 Our Love Affair with the President

Watching last night’s inauguration balls and the news commenters, after spending much of my day at work watching the actual live feed on my PC, surrounded by a sea of coworkers doing the same and feeling the collective delight, joy and hearing the occasional clap or tears, I realized that our country is in love with our new president and his family, Michelle, Malia and Sasha.

Like a brand new mother or father enraptured with a newborn infant’s five perfect fingers or eagerly inhaling that new baby smell.

Like an infatuated teenager sighing at the way his/her crush’s hair falls just so or smiles or laughs.

That’s what we sounded last night, when we all delighted at Obama’s use of “old school,” or the way he held Michelle or so many other things about him (and her) that we find compellingly refreshing, charming, down to earth, delightful, beautiful, strong, and inspiring.

We have fallen in love. Perhaps, it’s my own tendency to idealize and romanticize. Perhaps, it’s something we all do. I think the romance and honeymoon has just begun and we’ve been waiting all this time to exhale.

Do it with me. Exhale, release, accept it. He is ours now, at least for the next four years.