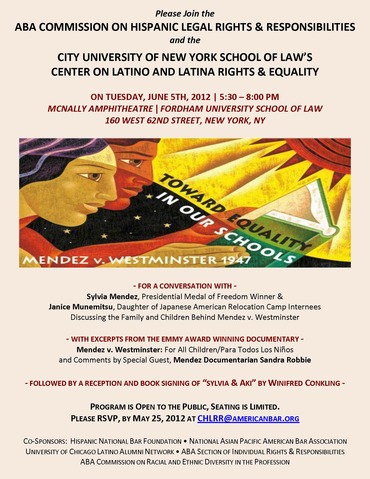 The American Bar Association‘s Commission on Hispanic Legal Rights and Responsibilities will be hosting an event focused on a landmark desegregation case, Mendez v. Westminster (1947).

It is the fascinating true story of a Japanese farming family from California sent to an American internment camp during World War II and the Mexican-Puerto Rican family who leased their farm. When the Mendez family tried to enroll their children in the local school, they were denied access due to anti-Mexican segregation laws! The Mendez family became lead plaintiffs in a successful class action lawsuit on behalf of Latinos who were denied the right to a public education.

Thurgood Marshall provided an amicus curiae brief in Mendez that contained the arguments he would later make in Brown v. Board of Education (1954).  In fact, following the Mendez decision, then California Governor Earl Warren signed a law repealing all remaining segregation laws within the state. Later, as Chief Justice of the U.S. Supreme Court, he wrote the Brown opinion which repealed “separate but equal” schools as a violation of the 14th Amendment’s Equal Protection Clause.

This event will include a conversation between Janice Munemitsu, whose family owned the farm, and Sylvia Mendez who was one of the children denied enrollment. CNN Legal Analyst Asunción “Sunny” Hostin will moderate. Filmmaker Sandra Robbie will show excerpts from her Emmy Award-winning documentary on the subject titled For All Chrildren/Para Todos Los Niños. Children’s book author Winifred Conkling will sign free copies* of her book on the subject, Sylvia and Aki.

There will be a reception with complimentary food and refreshments. The event is free of charge.

If you wish to attend this historic event the details are as follows: