Now You too can Colonize Puerto Rico fro ...

Well, now you can! For the low price of $31.63, you can play the strategy and economic resources board game
Puerto Rico, for the whole family, brought to you by Rio Grande Games. 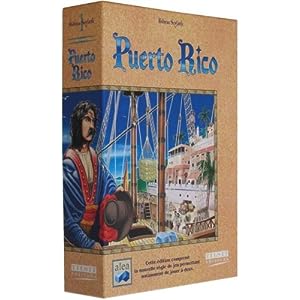 Which roles will you play in the new world?

Will you own the most
prosperous plantations?

Will you build the most valuable buildings? You
have but one goal: achieve the greatest prosperity.

The players are plantation owners in Puerto Rico in the days when
ships had sails. Growing up to five different kind of crops: Corn,
Indigo, Coffee, Sugar and Tobacco, they must try to run their business
more efficiently than their close competitors; growing crops and storing
them efficiently, developing San Juan with useful buildings, deploying
their colonists to best effect, selling crops at the right time, and
most importantly, shipping their goods back to Europe for maximum
benefit.

A novel game system lets players choose the order of the
phases in each turn by allowing each player to choose a role from those
remaining when it is their turn. No role can be selected twice in the
same round. The player who selects the best roles to advance their
position during the game will win.

Winner of an International Gamers Award in the General Strategy category for 2003.

Winner of the Golden Feather for the best game rules.

Shipping: Currently, item can be shipped only within the U.S. and to APO/FPO addresses.” [Does not ship to PR!]