No Mexicans, Women, or Dogs Allowed

No Mexicans, Women, or Dogs Allowed 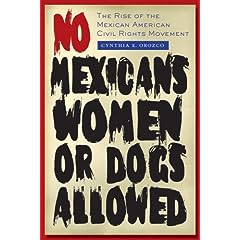 “The book starts out by defining the cultural differences between Mexican Americans whose families have lived in Texas since before it became a state and recently immigrated Mexicans—a difference that many modern Americans still struggle with.

Orozco then delves into the history of the League of United Latin American Citizens, or LULAC as it is commonly known by, as well as other organizations that were influential in the Mexican-American civil rights movement.

She also takes on the issue of gender inequality within Mexican-American society and how this affected the civil rights movement and modern scholars’ perception of the women who participated in it.”

No Mexicans, Women, or Dogs Allowed: The Rise of the Mexican American Civil Rights Movement by Cynthia E. Orozco

Founded by Mexican American men in 1929, the League of United Latin-American Citizens (LULAC) has usually been judged according to Chicano nationalist standards of the late 1960s and 1970s. Drawing on extensive archival research, including the personal papers of Alonso S. Perales and Adela Sloss-Vento, No Mexicans, Women, or Dogs Allowed presents the history of LULAC in a new light, restoring its early twentieth-century context.

Against a backdrop of the Mexican Revolution, World War I, gender discrimination, and racial segregation, No Mexicans, Women, or Dogs Allowed recasts LULAC at the forefront of civil rights movements in America.