New Movie to Stream Online: Granito: How to Nail a Dictator

POV’s ‘Granito: How to Nail a Dictator’ Reveals a Documentary Film Colliding With History in a Quest for Justice; Film Premieres Thursday, June 28, 2012 on PBS

In a Startling Loop of Time and Memory, ‘Granito’ Shows How a Filmmaker’s First Documentary Has Been Instrumental in Indicting Guatemalan Ex-dictator Efraín Ríos Montt 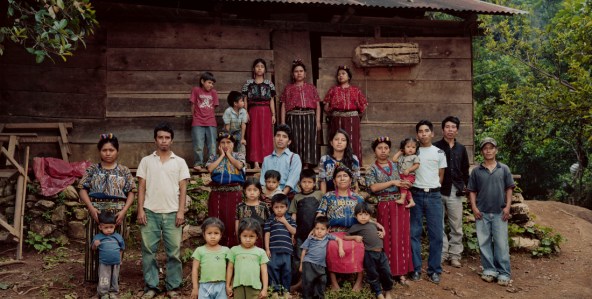 The Caba family in Ixil, Guatemala. The army massacred 95 people in their village in 1982. Photo: Dana Lixenberg.

In a stunning milestone for justice in Central America, a Guatemalan court recently charged former dictator Efraín Rios Montt with genocide for his brutal war against the country’s Mayan people in the 1980s—and Pamela Yates’ 1983 documentary, When the Mountains Tremble, provided key evidence for bringing the indictment. Granito: How to Nail a Dictator tells the extraordinary story of how a film, aiding a new generation of human rights activists, became a granito—a tiny grain of sand—that helped tip the scales of justice.

Granito: How to Nail a Dictator, by Peter Kinoy, Pamela Yates and Paco de Onis, has its national broadcast premiere on PBS’ POVseries on Thursday, June 28, 2012 at 10 p.m. (Check local listings). The full film and its prequel, When the Mountains Tremble, will also stream online —in English and Spanish— June 29-July 28. The Granito website includes a discussion guide and other viewing resources, plus video interviews and a live Q&A with the filmmakers after the broadcast.

Back in 1982, as a first-time filmmaker, Yates had used her seeming naiveté to gain unprecedented access to Ríos Montt, his generals and leftist guerrillas waging a clandestine war deep in the mountains. The resulting film, When the Mountains Tremble revealed that the Guatemalan army was killing Mayan civilians. Thirty years later, a Spanish lawyer investigating the Ríos Montt regime asked for her help. Yates believed her first film and its outtakes just might contain evidence to bring charges of genocide under international law.

Granito spans 30 years and portrays seven protagonists in Guatemala, Spain and the United States as they attempt to bring justice to violence-plagued Guatemala. Among the twists of fate:
Fast-forward to recent years, when lawyers and plaintiffs were seeking an international indictment in Spain, whose national court has led the way in such cases. And then this past January—one year after Granito’s premiere at the 2011 Sundance Film Festival—Ríos Montt was indicted in Guatemala for genocide, in what was a stunning precedent for that country. In May, he learned he would face a second genocide trial for killings in Dos Erres.

Granito is a complex, generational story of crime and punishment and also a historical thriller whose last chapter is yet to be written.

A companion transmedia project, Granito: Every Memory Matters (www.granitomem.com), has been created as an online intergenerational, interactive public archive of memories intended to expose further the history of the Guatemalan genocide.

About Pamela Yates
Pamela Yates was born and raised in the Appalachian coal-mining region of Pennsylvania but ran away at 16 to live New York City. She is a co-founder, with Peter Kinoy, of Skylight Pictures, a New York City- based company dedicated to creating films and advanced digital media that raise awareness of human rights issues. Four of Yates’ films as a director, When the Mountains Tremble, Poverty Outlaw, Takeover and The Reckoning (POV 2009) have been nominated for Grand Jury Prizes at Sundance. When the Mountains Tremble won Sundance’s Special Jury Prize in 1984. Her film State of Fear: The Truth About Terrorism, has been translated into 47 languages and broadcast in 154 countries, and won an Overseas Press Club Award. Yates received a Guggenheim Fellowship to support the making of Granito. She has also directed the development of the transmedia project Granito: Every Memory Matters.