New Book: The Woman I Kept to Myself By Julia Alvarez 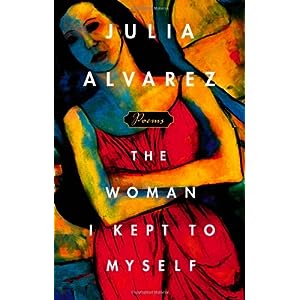 The works of award-winning poet and novelist Julia Alvarez are rich with the language and influences of two cultures: the Dominican Republic of her childhood and the America of her youth and adulthood. They have shaped her writing just as they have shaped her life.

Since her first celebrated novel, How the Garcia Girls Lost Their Accents, she has been articulating the passions and opinions of sisters and aunts, mothers and daughters, heroines and martyrs.

In The Woman I Kept to Myself, seventy-five poems that weave together the narrative of a woman’s inner life, it is Julia Alvarez’s own clear voice that sings out in every line. These are not poems of a woman discovering herself–Alvarez might say that’s what her twenties were for–but of a woman returning to herself. Now, in the middle of her life, she looks back as a way of understanding and celebrating the woman she has become.

And she hides nothing: from her early marriages to her late-in-life love, from the politics that informed her to the prejudice that haunts her still. Her fears, her accomplishments, and the ready humor that permeates even her darkest thoughts are all proffered to the reader.

Perhaps the truest words to describe this remarkable collection are the two that give the last section its title: keeping watch. We are pulled into the intimate circle of a woman who keeps us company by sharing the stories and insights that we often keep to ourselves.