New Book: What You See in the Dark by Manuel Muñoz 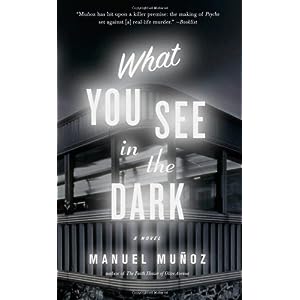 What You See in the Dark by Manuel Munoz is called a stellar new first novel by Publisher’s Weekly: ” In 1959, the Director (i.e., Alfred Hitchcock) arrives in Bakersfield, Calif., to film Psycho, along with the Actress (i.e., Janet Leigh), who’s struggling to get a handle on the character she will portray.

Providing counterpoint to the events surrounding the making of the iconic Hollywood film, including the search for a motel to serve as the exterior of the Bates Motel, is the story of locals Dan Watson and Teresa Garza, whose doomed love affair ends in murder.

The author brilliantly presents the Actress’s inner thoughts, while he handles the violence with a subtlety worthy of Hitchcock himself. The lyrical prose and sensitive portrayal of the crime’s ripple effect in the small community elevate this far beyond the typical noir.”