New Book: The Wandering Gene and the Indian Princess: Race, Religion, and DNA

New Book: The Wandering Gene and the Ind ...

I had a chance to preview a copy of The Wandering Gene and the Indian Princess: Race, Religion, and DNA by Jeff Wheelwright, which will be published in January 2012. 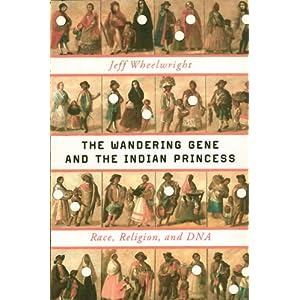 My initial thoughts were that it would be a Hispano spin on The Red Queen: Sex and the Evolution of Human Nature by Matt Ridley meets The Immortal Life of Henrietta Lacks by Rebecca Skloot.

It reads a little more academic ethnography than narrative but is worth checking out if you have an interest in Sephardi Jews and Southwest Hispano ancestry, the tracing of cultural history across time and place, and the juxtaposition of genetics and modern medicine:

A vibrant young Hispano woman, Shonnie Medina, inherits a breast-cancer mutation known as BRCA1.185delAG. It is a genetic variant characteristic of Jews. The Medinas knew they were descended from Native Americans and Spanish Catholics, but they did not know that they had Jewish ancestry as well. The mutation most likely sprang from Sephardic Jews hounded by the Spanish Inquisition. The discovery of the gene leads to a fascinating investigation of cultural history and modern genetics by Dr. Harry Ostrer and other experts on the DNA of Jewish populations.

Set in the isolated San Luis Valley of Colorado, this beautiful and harrowing book tells of the Medina family’s five-hundred-year passage from medieval Spain to the American Southwest and of their surprising conversion from Catholicism to the Jehovah’s Witnesses in the 1980s. Rejecting conventional therapies in her struggle against cancer, Shonnie Medina died in 1999. Her life embodies a story that could change the way we think about race and faith.

The Wandering Gene and the Indian Princess: Race, Religion, and DNA explores topics like the Marranos, secret Jews of Spain, St. Teresa of Avila who was of Jewish converso stock, the possibility of hidden Jewish symbolism in Don Quixote, written by a supposed Converso (a forced convert to Christianity): Miguel de Cervantes, some of the  apocalyptic and medical perspectives from the Jehovah’s Witness faith, and more.

You may read a summary of each chapter to the book here to the accompaniment of a tune from Old New Mexico, sung by a carrier of the gene, Robert Martinez.