New Book: Thoughts Without Cigarettes: A Memoir by Oscar Hijuelos

New Book: Thoughts Without Cigarettes: A ... 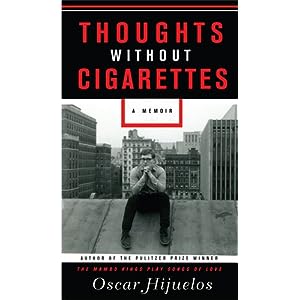 The beloved Pulitzer Prize-winning novelist turns his pen to the real
people and places that have influenced his life and, in turn, his
literature. Growing up in 1950’s working-class New York City to Cuban
immigrants, Hijuelos journey to literary acclaim is the evolution of an
unlikely writer.

Oscar Hijuelos has enchanted readers
with vibrant characters who hunger for success, love, and
self-acceptance. In his first work of nonfiction, Hijuelos writes from
the heart about the people and places that inspired his international
bestselling novels.

Born in Manhattan’s Morningside Heights to
Cuban immigrants in 1951, Hijuelos introduces readers to the colorful
circumstances of his upbringing. The son of a Cuban hotel worker and
exuberant poetry- writing mother, his story, played out against the
backdrop of an often prejudiced working-class neighborhood, takes on an
even richer dimension when his relationship to his family and culture
changes forever. During a sojourn in pre-Castro Cuba with his mother, he
catches a disease that sends him into a Dickensian home for terminally
ill children. The yearlong stay estranges him from the very language and
people he had so loved.

With a cast of characters whose stories are both funny and tragic, Thoughts Without Cigarettes
follows Hijuelos’s subsequent quest for his true identity into
adulthood, through college and beyond-a mystery whose resolution he
eventually discovers hidden away in the trappings of his fiction, and
which finds its most glorious expression in his best-known book, The Mambo Kings Play Songs of Love. Illuminating the most dazzling scenes from his novels, Thoughts Without Cigarettes reveals the true stories and indelible memories that shaped a literary genius.