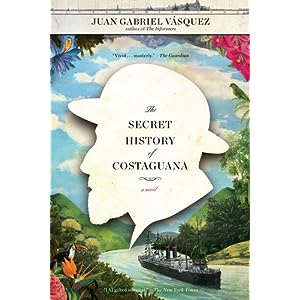 Juan Gabriel Vásquez is the critically acclaimed, award-winning Colombian author of The Informers. He has translated works by E. M. Forster, Victor Hugo, and John Dos Passos, among others, into Spanish. His fiction has been translated into fourteen languages.


In the early twentieth century, a struggling Joseph Conrad wrote his great novel Nostromo, about a South American republic he named Costaguana. It was inspired by the geography and history of Colombia, where Conrad spent only a few days. But in Juan Gabriel Vásquez’s novel The Secret History of Costaguana, we uncover the hidden source- and one of the great literary thefts.

On the day of Joseph Conrad’s death in 1924, the Colombian-born José Altamirano begins to write and cannot stop. Many years before, he confessed to Conrad his life’s every delicious detail-from his country’s heroic revolutions to his darkest solitary moments. Conrad stole them all. Now Conrad is dead, but the slate is by no means clear- Nostromo will live on and Altamirano must write himself back into existence. As the destinies of real empires collide with the murky realities of imagined ones, Vásquez takes us from a flourishing twentieth-century London to the lawless fury of a blooming Panama and back.


Tragic and despairing, comic and insightful, The Secret History of Costaguana is a masterpiece of historical invention. It will secure Juan Gabriel Vásquez’s place among the most original and exuberantly talented novelists working today.