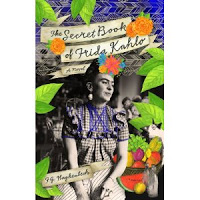 In The Secret Book of Frida Kahlo: A Novel by F. G. Haghenbeck, he keeps her alive, if only in our fancy.

More than half a century after her death, Frida Kahlo continues to inspire a devoted following. Her paintings command more money than any other female artist, and her work was the first by a Mexican artist to be purchased by the Louvre. Now her fascinating life is the basis for a brilliant novel in Frida Kahlo’s Secret Book.


Acclaimed Mexican novelist F. G. Haghenbeck was inspired to write this book after a series of notebooks and sketchbooks were recently discovered among Frida’s belongings in Casa Azul, her home in CoyoacÁn, MÉxico City. Although her family never confirmed their authenticity, Haghenbeck imagines that one of the notebooks was a gift from her lover Tina Modotti after Frida nearly died. Frida called the notebook “El Libro de Hierba Santa” (“The Sacred Herbs Book”) and filled it with memories, ideas, and recipes for The Day of the Dead, the Mexican holiday that commemorates deceased friends and family through the cooking of a delicious feast of exotic dishes.

In a rich, luscious style bordering on magical realism, Haghenbeck takes readers on an intriguing ride through Frida’s life, including her long and tumultuous relationship with her lover Diego Rivera, the development of her artistic vision, her complex personality, her lust for life, and her existential feminism. The book also includes stories about the remarkable people who were a part of her life, including Georgia O’Keeffe (with whom she had an affair), Trotsky, Nelson Rockefeller, Hemingway, Dos Passos, Henry Miller, and DalÍ.


F. G. Haghenbeck, a native of Mexico, is an award-winning novelist and screenwriter. His novel Frida Kahlo’s Secret Book has been translated into ten languages. He lives in TehuacÁn, Mexico.