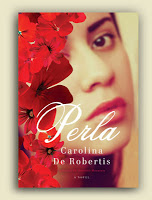 Perla is a new novel by by Carolina De Robertis, an Uruguayan writer whose family at immigrated to England, Switzerland, and California. Prior to completing her first novel, she worked in women’s rights organizations for ten years, on issues ranging from rape to immigration. While house-sitting for her well-to-do parents, Buenos Aires college student Perla Correa is confronted by a strange intruder. Having recently ended a serious relationship with Gabriel when his well-­intentioned prying into her family background became threatening, Perla is now forced to examine the role her father, a high-ranking military officer, played in Argentina’s horrific state-sponsored terror of the 1970s–80s, as well as her mother’s complicity. Perla’s journey intersects with the fate of thousands of “the disappeared” (los desaparecidos) as she pores over the clues to her family’s past and realizes the way to her own future. A translator, short fiction writer, and novelist—her debut, The Invisible Mountain, was an international best seller—De Robertis skillfully weaves a lyrical voice around her characters that treats victims, perpetrators, and bystanders with the same care and honesty. The result is a powerfully humanizing effort that examines a nation struggling with a very dark, recent past.

Watch an interview with Carolina De Robertis author of “Perla” – a novel that delves into the dark past of the Argentinian dictatorship below: