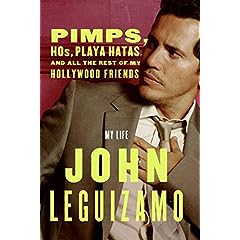 I have been a long-time fan of John Leguizamo, who is part Columbian & Puerto Rican so I am looking forward to reading his memoir due out in November –

Pimps, Hos, Playa Hatas, and All the Rest of My Hollywood Friends: My Life by John Leguizamo

John Leguizamo defies easy categorization. Fans of his smash-hit one-man shows (Mambo Mouth, Spic-O-Rama, Freak, and Sexaholic) have gotten a glimpse into his life, but this book tells the whole story, taking readers on a journey from his childhood in Queens (“my father was a strict autocrat-totalitarian-despot-dictator-disciplinarian”) to his current home at the top of the Hollywood pyramid-;actor, director, producer, one of the highest-paid Latin actors in the world, with the clout to shape every aspect of his own career.

Beginning on the classic New York comedy club circuit, where he made the rounds with Ray Romano, Mario Cantone, and Chris Rock, through his disastrous one-night run as Puck in Joseph Papp’s production of A Midsummer Night’s Dream, to his brief go at Method acting with Lee Strasberg (who died the next day; “I have that effect on people”) and his hit Broadway debut with Freak, the protean performer shares the stories behind his many roles-;what inspired them and what transpired as he created them.

Keenly intelligent and insanely funny, this book offers a unique behind-the-scenes look at the magic and chaos of stardom, as well as an intimate portrait of John Leguizamo’s greatest achievement-;to grow up Latino in America and to succeed on his terms.