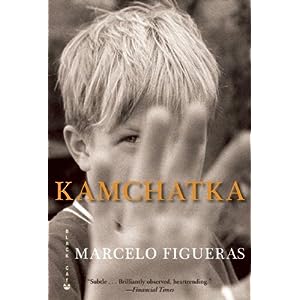 In 1976 Buenos Aires, a ten-year-old boy lives in a world of school lessons and comic books, TV shows and games of Risk—a world in which men have superpowers and boys can conquer the globe on a rectangle of cardboard.

But in his hometown, the military has just seized power, and amid a climate of increasing terror and intimidation, people begin to disappear without a trace.

When his mother unexpectedly pulls him and his younger brother from school, she tells him they’re going on an impromptu family trip. But he soon realizes that this will be no ordinary holiday: his parents are known supporters of the opposition, and they are going into hiding.

Holed up in a safe house in the remote hills outside the city, the family assumes new identities. The boy names himself Harry after his hero Houdini, and as tensions rise and the uncertain world around him descends into chaos, he spends his days of exile learning the secrets of escape.

Kamchatka is the portrait of a child forced to square fantasy with a reality in which family, politics, history, and even time itself have become more improbable than any fiction. Told from the points of view of Harry as a grown man and as a boy, Kamchatka is an unforgettable story of courage and sacrifice, the tricks of time and memory, and the fragile yet resilient fabric of childhood.

Born in 1962 in Buenos Aires, Marcelo Figueras is an award-winning journalist, screenwriter, and novelist. He has also been a war correspondent and singer. Figueras makes daily contributions to the Spanish-language literary blog, www.elboomeran.com. His books have previously been translated into French, German, Dutch, Polish and Russian; This is his first novel to be published in English.