New book: Island Beneath The Sea by Isabel Allende

New book: Island Beneath The Sea by Isab ...

Last year, I wrote about Allende’s new book, La Isla Bajo El Mar and now it is available in English: Island Beneath the Sea: A Novel by Isabel Allende.
I can’t wait to read it. 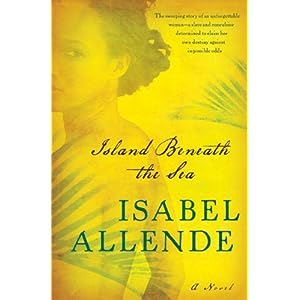 Allende, an entrancing and astute storyteller cherished the world over, returns to historical fiction to portray another resilient woman whose life embodies the complex forces at work in the bloody forging of the New World. Zarité, called Tété, is born into slavery in the colony of Saint-Domingue, where enslaved Africans are worked to death by the thousands, and European men prey on women of color.  So it is with Tété and her “master,” the deeply conflicted plantation owner Toulouse Valmorain, who relies on her for everything from coerced sex to caring for his demented first wife, his legitimate son, and their off-the-record daughter.

When the slave uprising that gives birth to the free black republic of Haiti erupts, Toulouse, Tété, and the children flee to Cuba, then to New Orleans. In a many-faceted plot, Allende animates irresistible characters authentic in their emotional turmoil and pragmatic adaptability. She also captures the racial, sexual, and entrepreneurial dynamics of each society in sensuous detail while masterfully dramatizing the psychic wounds of slavery.

Sexually explicit, Allende is grace incarnate in her evocations of the spiritual energy that still sustains the beleaguered people of Haiti and New Orleans. Demand will be high for this transporting, remarkably topical novel of men and women of courage risking all for liberty. –Donna Seaman