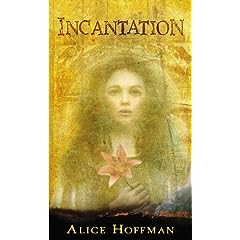 Alice Hoffman is one of my favorite authors and she has a new book about a Spanish Jew.

Growing up in Spain around 1500 in the village where her family has lived for 500 years, Estrella, 16, knows that there are secrets in her home. As books are burned in the streets, and Jews from the nearby ghetto are murdered, she confronts the reality that she is a Marrano, part of a community of underground Jews who attend a special “church.” The plot tangent involving Estrella’s best friend, Catalina, jealous because Estrella has taken her boyfriend, seems too purposeful, but the historical fact is compelling, with the reason for the secrets spelled out in the horrifying persecution:

Estrella is witness to her mother’s burning and her brother’s bones being broken by the police “one at a time.” Acclaimed adult writer Hoffman, whose YA books include Aquamarine (2001), makes the history immediate in Estrella’s spare, intense first-person narrative, in which tension builds as Estrella’s discovers her hidden identity. Suggest Deborah Siegel’s The Cross by Day, the Mezuzzah by Night (1999) or June Weltman’s Mystery of the Missing Candlestick (2004) to readers wanting other stories about Marranos.