New Book: Have You Seen Marie? By Sandra Cisneros 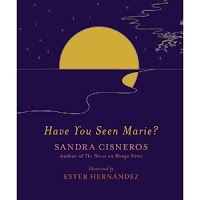 New Book: Have You Seen Marie? By Sandra ...

The internationally acclaimed author of The House on Mango Street gives us a deeply moving tale of loss, grief, and healing: a lyrically told, richly illustrated fable for grown-ups about a woman’s search for a cat who goes missing in the wake of her mother’s death.

Have You Seen Marie? By Sandra Cisneros: The word “orphan” might not seem to apply to a fifty-three-year-old woman. Yet this is exactly how Sandra feels as she finds herself motherless, alone like “a glove left behind at the bus station.”


What just might save her is her search for someone else gone missing: Marie, the black-and-white cat of her friend, Roz, who ran off the day they arrived from Tacoma.


As Sandra and Roz scour the streets of San Antonio, posting flyers and asking everywhere, “Have you seen Marie?” the pursuit of this one small creature takes on unexpected urgency and meaning.


With full-color illustrations that bring this transformative quest to vivid life, Have You Seen Marie? showcases a beloved author’s storytelling magic, in a tale that reminds us how love, even when it goes astray, does not stay lost forever.

Sandra Cisneros is the author of two highly celebrated novels, The House on Mango Street and Caramelo. Her awards include National Endowment for the Arts Fellowships, the Lannan Literary Award, the American Book Award, and a MacArthur Fellowship. Other books include the story collection Woman Hollering Creek; two books of poetry; and two books of children’s literature. Her work has been translated into more than twenty languages. Cisneros is the founder of the Alfredo Cisneros Del Moral and Macondo Foundations, which serve creative writers.Ester Hernández is an internationally acclaimed visual artist whose work is in the permanent collections of the Smithsonian American Art Museum, the Library of Congress, the San Francisco Museum of Modern Art, and the Museo Casa Estudio Diego Rivera y Frida Kahlo in Mexico City. She lives in San Francisco.