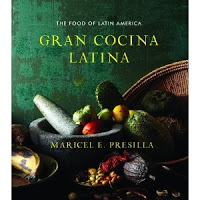 I can remember a conversation I had a few years back with my then mentor, Michael Pietsch, Executive Vice President and Publisher of Little, Brown and Company, about cookbooks. I had expressed my concerns that the web was changing consumers’ needs for buying cookbooks since it was so easy to just get them online. I remember him furrowing his brow and internally cringing at the thought that that perhaps I had been too frank. I don’t think publishers need to be worried anymore though.

Lately, however, I’ve noticed a trend toward the objectification of things and especially vintage items, like books and vinyl. I think cookbooks, especially the most eye pleasing will fall into this category and they will always have a place on a shelf or a coffee table.

During my early twenties, I collected cookbooks, which I dreamed I would one day display in my kitchen, in the home of my future. When I came across Gran Cocina Latina: The Food of Latin America by Maricel E. Presilla, I felt that old knee jerk shopaholic/collector pull: have-to-have-it!

How to cook everything Latin American.

Gran Cocina Latina unifies the vast culinary landscape of the Latin world, from Mexico to Argentina and all the Spanish-speaking countries of the Caribbean. In one volume it gives home cooks, armchair travelers, and curious chefs the first comprehensive collection of recipes from this region.


An inquisitive historian and a successful restaurateur, Maricel E. Presilla has spent more than thirty years visiting each country personally. She’s gathered more than 500 recipes for the full range of dishes, from the foundational adobos and sofritos to empanadas and tamales to ceviches and moles to sancocho and desserts such as flan and tres leches cake. Detailed equipment notes, drink and serving suggestions, and color photographs of finished dishes are also included. This is a one-of-a-kind cookbook to be savored and read as much for the writing and information as for its introduction to heretofore unrevealed recipes. Two-color; 32 pages of color photographs; 75 line drawings.


Maricel E. Presilla is the co-owner of Zafra and Cucharamama, two Latin restaurants in Hoboken, New Jersey. She holds a doctorate in medieval Spanish history from New York University and lives in Weehawken, New Jersey.