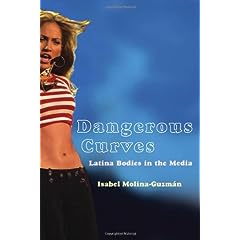 Dangerous Curves: Latina Bodies in the Media by Isabel Molina-Guzman

With images of Jennifer Lopez’s butt and America Ferrera’s smile saturating national and global culture, Latina bodies have become an ubiquitous presence. Dangerous Curves traces the visibility of the Latina body in the media and popular culture by analyzing a broad range of popular media including news, media gossip, movies, television news, and online audience discussions.

Isabel Molina-Guzmán maps the ways in which the Latina body is gendered, sexualized, and racialized within the United States media using a series of fascinating case studies. The book examines tabloid headlines about Jennifer Lopez’s indomitable sexuality, the contested authenticity of Salma Hayek’s portrayal of Frida Kahlo in the movie Frida, and America Ferrera’s universally appealing yet racially sublimated Ugly Betty character. Dangerous Curves carves out a mediated terrain where these racially ambiguous but ethnically marked feminine bodies sell everything from haute couture to tabloids.

Through a careful examination of the cultural tensions embedded in the visibility of Latina bodies in United States media culture, Molina-Guzmán paints a nuanced portrait of the media’s role in shaping public knowledge about Latina identity and Latinidad, and the ways political and social forces shape media representations.

Isabel Molina-Guzman was born in Rio Piedras, Puerto Rico to a Puerto Rican mother and Dominican father. She migrated to Florida, USA at the age of 7 with her two younger sisters. In 2000 she earned her Ph.D. from the University of Pennsylvania Annenberg School for Communication.

Her new book Dangerous Curves: Latina Bodies in the Media reflects her long-standing interest in the intersections between gender, race, and Latina/o identity. She began researching the book in 1999 at the height of the international media storm over the fate of Elian Gonzalez. At the same time news media attention was focusing on the young Cuban boy refugee, she noticed the increasing visibility of Puerto Rican entertainers Jennifer Lopez and Mexican actor Salma Hayek. Together the news and entertainment visibility struck her as indicative of larger social and cultural transformations in the United States. The book explores why Latinas are so visible in the news and entertainment media today and the cultural and political consequences of such visibility.

Her work has appeared in numerous edited collections such as Myra Mendible’s From Banannas to Buttocks: The Latina Body in Popular Film and Culture (University of Texas Press) and Angharad Valdivia’s Latino Communication Studies (Peter Lang) and scholarly journals such as Critical Media Communication Studies, Journalism, Latino Studies.