New Book: Before the Rain: A Memoir of Love and Revolution by Luisita Lopez Torregrosa 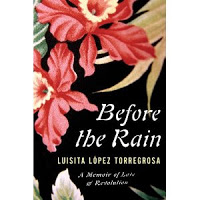 I have to admit that when I initially spotted Before the Rain: A Memoir of Love and Revolution by Luisita Lopez Torregrosa the cover took my breath away. It was just as beautiful when my review copy came in the mail, two weeks ago. I look forward to reading this one. In a voice haunting and filled with longing, Before the Rain tells the story of love unexpected, its fragile bounds and subtle perils. As a newspaper editor in the ’80s, Luisita Torregrosa lived her career.


Enter Elizabeth, a striking, reserved, and elusive writer with whom Torregrosa falls deeply in love. Their story—irresistible romance, overlapping ambitions, and fragile union—unfolds as the narrative shifts to the Philippines and the fall of Ferdinand Marcos.


There, on that beautiful, troubled island, the couple creates a world of their own, while covering political chaos and bloody upheavals. What was effortless abroad becomes less idyllic when they return to the United States, and their ending becomes as surprising and revealing as their beginning.


Torregrosa captures the way love transforms those who experience it for an unforgettable, but often too brief, time. This book is distinguished not only by its strong, unique, and conflicted heroines, but also by Torregrosa’s lyrical portrait of the Philippines and the even more exotic heart of intimacy.

Luisita López Torregrosa is the author of The Noise of Infinite Longing and was an editor at the New York Times. As a special correspondent for the San Francisco Chronicle she reported firsthand on the coup attempts against President Corazon Aquino, the communist insurgency in the Philippines, and the protests in South Korea that led to the fall of authoritarian rule. Her articles also have appeared in Vanity Fair, New York Times, Condé Nast Traveler, and Vogue. Follow her via Twitter @luisitalt.


You can read a short excerpt here.

If you enjoy it, you also might want to check out her other book, The Noise of Infinite Longing: A Memoir of a Family–And an Island: A beautifully written memoir about a Puerto Rican family, whose siblings reunite for the first time upon their mother’s death, after having scattered to various places and various lives after they reached early adulthood. It is also a universal story about family connections and what happens to them as we grow up.