My Colombian War: A Journey Through the Country I Left Behind 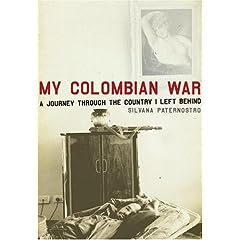 Growing up in the coastal city of Barranquilla, Colombia, Silvana Paternostro indulged in the typical concerns of a privileged young girl: friendships and parties, school and family. But soon it became apparent that life in Colombia would not go on as usual. Strange planes appeared overhead, the harbingers of the marijuana drug trade that would explode into cocaine wars over the next decade, and soon after, a disputed election would lead to demonstrations and kidnappings targeting the affluent landed eliteincluding Paternostros family.

A revolution was brewing, and the social inequalities reflected in her life would boil over into the most violent, most protracted, and most misunderstood civil war of our time. In My Colombian War, Paternostro journeys back to the place where her family and her closest friends still live, weaving authentic experience into a history of this ongoing conflict. Through interviews she allows us to witness the treacherous war zone that Colombia has become, projected on the daily lives of its citizens. Paternostros book is a stunning, comprehensive narrative of Colombias past and present.

Silvana Paternostro is a Colombian-born journalist. Her articles have appeared in The New York Times Magazine, The Washington Post, and Time, among other publications, and she is the author of In the Land of God and Man, a finalist for the PEN/Martha Albrand Award. In 1999 she was selected by Time/CNN as one of the fifty Latin American leaders for the millenium. A senior fellow at the World Policy Institute, Paternostro live in New York City.