New Allende on the Horizon: The Island Below the Sea

New Allende on the Horizon: The Island B ...

Isabel Allende’s first novel since 2006 titled, La Isla Bajo El Mar (The Island Below the Sea) published in Spanish first debuts this month. Vintage Español brings us this novel – the story of a slave fighting to win her freedom in 18th century Santo Domingo. No word yet on when the English edition will be available…

Allende Articulates Her “Obsession” with Freedom in New Novel

BOGOTA – Chilean-American writer Isabel Allende said in an interview published Friday in the online edition of Colombian daily El Tiempo that her new novel, which features a female slave as protagonist, articulates her “obsession” with freedom.

“My life is marked by my obsession with freedom … All forms of oppression and injustice affect me personally and slavery, of course, is the most extreme form. I had to write this book. I think Zarite, the protagonist, was made from my own rib,” said Allende, the author of “The House of the Spirits” and one of the world’s most widely read Latin American authors.

While writing her novel “El Zorro” (Zorro) in 2005, Allende said Zarite (Tete), the female slave who is the main character of her new work – titled “La isla bajo el mar” (The Island Below the Sea) – “came to her” in the U.S. city of New Orleans. 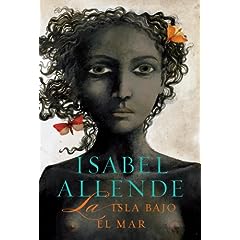 “New Orleans at the beginning of the 1800s received a large number of French immigrants who fled the 1791-1804 slave revolt in the colony of Saint-Domingue, which today is Haiti,” said the writer, who currently lives in California.

Upon further investigation, Allende said she felt the need to articulate the cruelty that occurred in that Caribbean colony, which received 30,000 slaves annually.

“She embodies freedom of the spirit, a force as powerful as a hurricane,” the writer said of Tete, who in the novel is sold as a young girl by Madame Delphine to Violette to be the servant of her lover, French landowner Toulouse Valmorain.

According to Allende, “the worst form of slavery” in Latin America “occurred in Saint-Domingue, where there were 34,000 free people and a half-million slaves.”

“The idea the planters had was to work their slaves to death; if they lasted four or five years they were satisfied because it was more profitable to replace them with fresh meat from Africa,” she said.

“Despite all that, Haiti was the first independent republic in the Americas (after the United States). The Haitian people are friendly, creative, wonderful; it’s a tragedy that that country is ruined,” the author said of the poorest nation in the Western Hemisphere.

Allende added that people should not forget that “slavery still exists, although there are attempts to hide it. They still sell people, especially women and children. They’re invisible beings.”

The worldwide release of “La isla bajo el mar” is scheduled for Aug. 20.