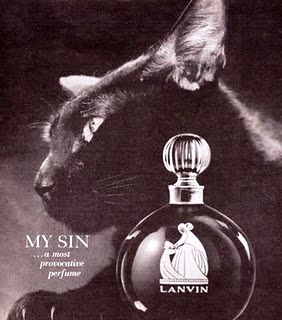 Yesterday, I visited my mother and asked why my grandfather chose to be buried in Puerto Rico (as opposed to here in NYC). My mother explained that he wanted to be buried in the family crypt along with his mother and other relatives.

The conversation soon turned into an ancestry lesson, and quickly, I had to get out paper and a pen to keep the names and family tree straight, basically putting all that anthropology/ethnography training to good use.

The one anecdote I enjoyed the most was learning of my great grandmother Consuelo, who was a dark skinned woman, who wore a French perfume, called My Sin by Lanvin, high heels, and gold jewelry. She gave my mother her very first pair of high heel shoes.

I looked up this perfume online, trying to visualize my great grandmother in rural 1940s Puerto Rico, the wife of a well-to-do rancher/store owner, wearing heels and wickedly delighting in telling my mother that her perfume was called “My Sin,” and decided that I would’ve liked this classy woman had I gotten to know her. According to the Puerto Rican Census, she was 25 years old in 1920, the era of the Flapper, and already married to my great grandfather but I would imagine still impressionable. My own grandmother was yet to make her own debut.

“My Sin” (Mon Peché) contained notes of aldehydes, bergamot, lemon, clary sage, neroli; heart notes of ylang-ylang, jasmine, rose, clove, orris, lily of the valley, jonquil, lilac; base notes of vanilla, vetiver, musk, woods, tolu, styrax, civet. It was first produced in 1925 and was so popular it was discontinued only in 1988.

From what I’ve read online, it was the perfume of what we refer to today as ladies who lunch, debutantes, society women, and was “both pure like a white pearl and very sensual; [the scent] of the woman in black who smoked and wore as an accessory just a white flower.”

I’ve decided I’m a going to order a vintage bottle off of eBay, and whether I think it reeks or wholly imbibe the scent, my mom and I will draw in Consuelo’s sin. It too will be My Sin. It will be a keepsake to treasure forever.