Mother Atabey & the Web of Life: The Green Latina 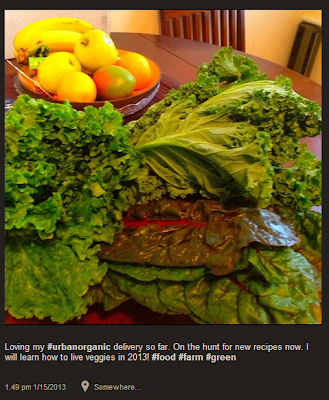 We travel in so many circles.
Renewed, reborn, reconnected,
over and over again.

Earlier this year in an attempt to eat healthier and greener, I joined Urban Organics, a service that delivers a box of fresh, organic produce from local farms every week to your home, after reading about it on Treehugger. In honor of Earth Day, I wanted to share a little bit of the experience here.

My first box endowed me with beautiful greens and fruits so pretty I was forced to Instagram.

I was mystified by all the lovely greens but luckily some were labeled and I quickly learned to distinguish Chard from Kale and so on. Using Pinterest and the web, I learned the best way to get grit and sand off the greens is by soaking them in a bowl, letting the soil and fine sand float to the top and then changing the water until it is all clear. Unfortunately, I learned this the hard way and can tell you that nothing sucks as much as chewing on gritty leaves.

Inspired by fellow bloggers like Chris Brogan, I bought a juicer and now about once a week, I make fresh carrot juice and a separate batch of orange or fruit juice. It’s great to consume but it’s quite a lot of work to rinse, chop, and then clean up the mess.

Part of the fun too was the “mystery box” angle to the delivery each week, sometimes I was at a complete loss with what to do, with say an eggplant, for example, which I don’t like and have never cooked. I ended up using a recipe I found online for Baba Ganoush and found it to be quite yummy. Part of the difficulty too was in the abundance of produce for only two people and not having the time to prep it and/or eat it.

I tried pickling beets, and freezing broccoli, green beans, and a random eggplant but soon my freezer was full. Twice, my produce drawer hit its limit and was overflowing with spuds and I then took a stab at making potato kugel for Passover and Shepherd’s Pie, Verdict: Delicious, very high in carbs and doesn’t keep very well. I even prepared filling nutritious breakfast treats in advance.

Every once in a while I was forced to chuck greens that wilted or completely yellowed and fruit that just went bad, all the while feeling guilty and wasteful. Even throwing out the pulp from my juicer, I wished I could donate it to someone’s compost pile if not longing for my own where chubby little worms could get their fill and give me rich soil for pretty flowers. Yet this is a start. I will lead a better more enriched life. I will eat less processed food. I will eat more food that was tenderly grown and made with love and compassion. I will not burden my descendants with the ills of obesity, diabetes or malnutrition. I will treat my body as the temple it has always been. Barriga llena, corazon contento. All in all, it’s been a low cost, fun experience toward a healthier future. I think I will continue the service through the summer just to feast on summer’s sweet harvest.