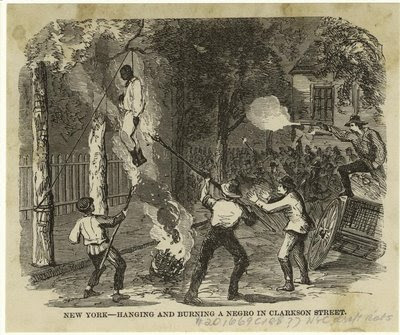 A couple of years ago, out of extreme boredom, I started doing research on lynchings that occurred within NYC. I had been wondering if they were as prevalent historically here as they were down South – I seriously hoped not but I decided to look any way. What I found rocked me to very core with its proximity.

I discovered that during the 1800s, a man was hanged on Clarkson Street, which ironically is now the home of Hot 97, considered hip-hop’s #1 radio station in the nation and Kiss FM. What was super eerie was that I happened to be on that same block (at my former job) at the time of the finding.

In addition and I couldn’t find any primary evidence but I spotted a few comments online about the gang wars that occurred in the 1950s between Italians and Puerto Ricans.

Apparently, a dark skinned Puerto Rican was murdered and strung from a lamp post in front of what was then Benjamin Franklin HS (now Manhattan Center for Science and Math), by the Rao’s restaurant, adjacent to Jefferson Park and the FDR. At some point, the community wanted to commemorate the location with a plaque but I’m not sure what happened with that and couldn’t find any further information. This sort of stuff didn’t make the news, not even back then.

What was scary for me was that I spent many, many days in my adolescent and teen years at that very location. In fact, my aunt and uncle lived around the corner from Rao’s.

As for recorded crimes, this is what I found: