Is Herman Badillo Right, Do We Not Value Education?

Is Herman Badillo Right, Do We Not Value ... 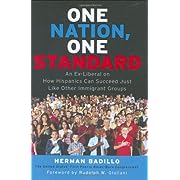 So everyone is taking about Herman Badillo’s book, One Nation, One Standard: An Ex-Liberal on How Hispanics Can Succeed Just Like Other Immigrant Groups. In fact a lot of brouhaha is stirring, which will surely sell him a lot of books and also open up a much needed discourse on education. I wanted to bring up the topic here to address a couple of points but also see what your thoughts were on the book and the issues.

From the Baltimore Sun:

Mr. Badillo, 77, the first native-born Puerto Rican elected to Congress, is
being criticized for writing in his new book, One Nation, One Standard, that too
many of his fellow Hispanic-Americans are stuck in poverty because they don’t
value education.

“Education is not a high priority in the Hispanic community,” wrote Mr. Badillo.

“Hispanic parents rarely get involved with their children’s schools. They seldom attend parent-teacher conferences, ensure that children do their homework or inspire their children to dream of attending
college.”

Unfortunately, Mr. Badillo is right, and not only about Hispanics.
Indifference to education is unfortunately epidemic across racial and ethnic
lines, and it is particularly damaging to the poor. For earlier waves of
immigrants to America, unskilled jobs were much more plentiful. Upward mobility
for most of today’s kids requires at least a couple of years of schooling beyond
high school.

Yet instead of discussing the points Mr. Badillo raises, many will try
to shout him down. Bronx Democratic leader Jose Rivera has blasted Mr. Badillo
in a New York Post interview as being a “total insult” to Latino parents. That’s
OK, Mr. Badillo says. He wanted to stir up a dialogue. The controversy will help
him sell a few more books too. Puerto Ricans certainly are not the only
Americans who need to read it.

Read the entire article here:
http://www.baltimoresun.com/news/opinion/oped/bal-op.page09jan09,0,6648057.story?coll=bal-oped-headlines
I agree that in my experience many parents in the Puerto Rican community do not focus on their children’s education. In fact, having grown up in Spanish Harlem in very close proximity to the Jewish community around the upper east side I have admired the cultural importance that they place on education and the arts.
I haven’t read the book and was infuriated to read that in discussing the book the Wall Street Journal referred to Badillo as an immigrant -Newsflash: Puerto Ricans are US Citizens, whether they live in the States or the Island. The ones who have migrated to the mainland are emigrants. You would think that a journalist would know better.
But maybe Badillo did it to himself because his title implies that ALL Hispanics are immigrants, which isn’t always true.
What do you all think about the issue?