Literanista August 8, 2009
I recently came across this great interview at www.motherjones.com calling William Vollmann “a writer with no borders.” 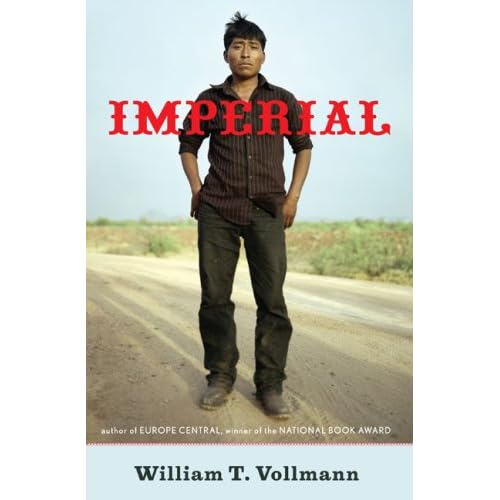 He refers to his new book, Imperial, as “the continuum between Mexico and America.”
From Booklist

A man of many words and few delusions, Vollmann is a National Book Award–winning novelist, a daring oral historian, and an intrepid journalist. His latest moral inquiry is an encyclopedic gathering of facts, stories, impressions, and analysis about the volatile and tragic U.S.-Mexico borderland. Imperial is a county in California, a city, a valley, and a beach, but for Vollmann, “Imperial is the continuum between Mexico and California”—a geographical and spiritual entity, the “kingdom of secrets,” and the site of epic battles over water, work, sovereignty, power, and wealth.

Ten years in the making, this immense, poetically structured, provoking, and surprisingly intimate volume of reportage, history, and reflection chronicles Vollmann’s risky journeys through deserts, cities, and archives, through contradictions, confessions, and lies. Vollmann talks with all kinds of people under circumstances alarming, bizarre, tender, and funny. He navigates the infamously foul New River, descends into Mexicali’s “Chinese tunnels,” and vigorously investigates the urgent conundrums of illegal immigration and floundering agriculture, increasing water usage and falling water tables, and pollution and prejudice.

He writes of love and hate; strip clubs, churches, and the maquiladoras; and violence and generosity. He asks, “What can I learn?” And he confesses, “everything is precious to me.” In an age of trash punditry, Twitter, and gnat-like attention spans, Vollmann’s curiosity, forthrightness, lyricism, capaciousness, and empathy are revolutionary.