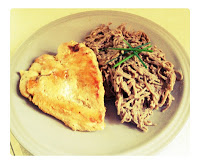 This past weekend I moved in with my boyfriend of over a year. We’re both food enthusiasts and in the time we’ve been dating we invented a game called Broke-A$$ Chopped. As fans of the Food Network’s Chopped, our own iteration came about from my skills in the kitchen and his previously unstocked, sad (read: Frat House-ish) pantry. I had fun devising up good foods with meager accouterments and a lack of (proper) pots and pans but those days are NOW over.

We have begun a health kick together and in spite of the hectic Labor Day weekend move, I managed to cook on Saturday. Inspired by Pinterest too, I want to share this Lemon Chicken & Soba Noodles in Peanut Butter Sauce recipe that I put together with you.

I’ve taken to cleaning, seasoning and bagging my meats right after I get back from the market. I usually then freeze them and they taste so amazing after they have had time to absorb and the flavors of the rubs/marinades. I usually do different batches so we can have some variety.

For this healthy recipe for two, I used 3-4 pieces of organic chicken cutlets, which I seasoned with 1/2 teaspoon of Mrs. Dash’s lemon pepper, 1 teaspoon of white wine and 1 of olive oil, half a packet of Sazon, a dusting of Goya Adobo Light and garlic powder.

After seasoning, I froze the cutlets in a Ziploc and then defrosted them in the refrigerator when I was ready to cook them on Saturday. I simply seared them in a non-stick frying pan, misted lightly with canola oil and once golden, I covered them and lowered the flame to continue the slow cook until the chicken was cooked thoroughly. I usually just peek inside the thickest cut of the meat with a fork every 5-10 minutes until the chicken is completely white, keep watch, because you don’t want dry chicken or pink, raw, inedible chicken.

If you’ve aren’t familiar with Soba Noodles, they hail from Japan and can be eaten cold or hot. They are made with  buckwheat (most brands are Gluten-free but please read the label) and have almost less than half the calories and carbs of white flour pasta. I found some in my local dollar store and stocked up.

They were very easy to cook. I just added them to boiling hot water, stirred and removed after three minutes. I went online to look for an easy peanut butter sauce to make because the last time I attempted to make this sauce, the recipe I used had a bazillion Asian ingredients that I had to go out and buy and the sauce still didn’t taste authentic.

This is the Peanut Butter Sauce recipe I found that I slightly altered:

I added 2 tabls of red balsamic vinegar, 1 teaspoon of Siracha, 1 teaspoon of garlic powder, skipped the pepper flakes, and warmed this sauce over the stove with a piece of fresh ginger, which I removed once the sauce was completely melted/mixed together. It was really easy to make and tasted like the real thing.

Update: I also added some 1 chopped clove of garlic.

I let the sauce cool down and mixed it in with the noodles. They weren’t exactly beautiful – I messed them up on the first try. In fact, they looked a little bit like brown mush (his puddy ugly brown plates didn’t help – ergo, we’re donating those) but once served with the chicken, which I butterflied for faster cooking (look at that perfect heart shape), the whole dish was scrumptious and the perfect meal for ravenous and exhausted movers & shakers.

This was His portion so it’s a bigger ration. (Yes, I gave him my heart.)

My recommendations: Use low sodium, fresh, organic ingredients when you can otherwise this dish will be really, really salty, don’t overcook the noodles or they will turn to mush. For color, top off with chopped scallions or chives. This flavorful dish can be served hot or cold paired with a sweet/dry white wine.