From One of the Bestselling Authors of the Spanish-Speaking World

From One of the Bestselling Authors of t ... 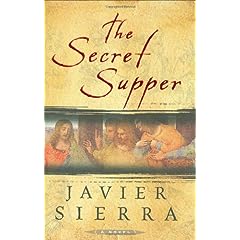 he Secret Supper: A Novel by Javier Sierra, debuted earlier this year but in case you or your favorite bibliophile haven’t read it yet, it might make a great gift (the best kind: that keeps giving) for the holidays.

Set in the late 15th century, Sierra’s first book translated into English revolves around a papal inquisitor’s investigation into Leonardo da Vinci’s alleged heresies and offers a new way of interpreting The Last Supper. After receiving a series of cryptic messages from “the Soothsayer,” who warns the 15th century church that “art can be employed as a weapon,” the Secretariat of Keys of the Papal States dispatches Father Agostino Leyre on a twofold mission to Milan: identify the Soothsayer and discover what, if any, messages da Vinci is hiding in the painting.

He makes a series of sometimes muddled discoveries about the painting, leading up to his interpretation of the painting’s true meaning (not revealed until the last line of the last page). Those not well versed in Catholic history may have trouble following the many subplots involving factionalism and dissent within the church. The combination of code breaking, secrecy, chicanery within the Catholic Church and a certain artist is by now a familiar one, but Sierra’s book, already a bestseller in Europe, is a fresh contribution to the da Vinci industry.