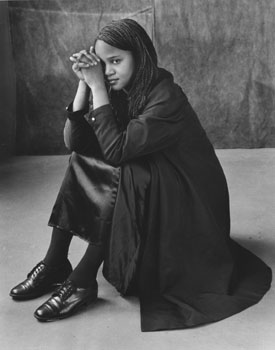 Galleycat had some great coverage on the PEN American Center – A Tribute to Chinua Achebe event that I couldn’t attend but really, really wish I had!

Edwidge Danticat, one of my favorite authors spoke about Achebe’s influence on her and her work as did the bold and beautiful poet and political activist Suheir Hammad, whom I know from way back. We went to college together, took the same English classes and I also interviewed her for our college paper. Too bad, I missed it. Toni Morrison was there as well as all sorts of great literati. I remember reading Things Fall Apart in HS (Shout out to Ms. Rogers!) and it was a book and class (Mase was in my class too) I never forgot.

I’m now looking forward to attending a different sort of cultural event on Sunday, In the Heights – The Musical. There’s an interesting article here about it: “A young Latino’s $2.5 million off-Broadway debut”. Now I’m not too fond of musicals, I find them somewhat boring but I’m glad to get out, support some Hispanic culture on Broadway and enjoy dinner and a play.

Earlier this month, I scored tickets for Cat on a Hot Tin Roof, unfortunately, it wasn’t as hot as I expected even with a cast made up of James Earl Jones, Phylicia Rashad, Terrence Howard, Anika Noni Rose and Giancarlo Esposito. The house was packed, which lent an air of excitement but unfortunately, it was made up of incredibly rude people who talked during the play, had cell phones going off and distracted me with the inconsiderate din of plastic wrappers unraveling.

I’ve made a commitment this year to really start not getting out and about more as opposed to being a literary recluse, but to attend as many cultural events as I can.

In fact, next weekend I’m also viewing a new play – ‘Jamaica, Farewell’ at the SoHo Playhouse, which I’m also looking forward to seeing.

On the benefits of Beauty Sleep:

I’m feeling much better today. My nerves were so worked up about my new gig that I found myself with a very odd case of insomnia. Me, Morpheus’ homeslice! (Morpheus is the Greek god of Sleep, my mom would often say to me he must love me because I was never very free from his embrace).

After getting something akin to perhaps 4-5 hours of sleep each night all week long, I finally managed to sleep through the entire night and this morning awoke to feel um, like a normal person.

There’s nothing quite like
a good start
and
a new beginning!