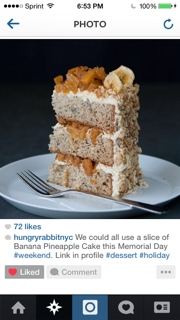 After spotting Ken’s from HungryRabbitNYC amazing looking Banana Pineapple Cake on Pinterest, I was inspired to make my own version for my SO’s birthday.

I am not going to lie the recipe seemed quite intense and it took me hours to prepare and finish this cake but I have to say not only was I impressed with the results, I actually felt proud of being able to create it. Maybe it’s because I miss eating butter but the Ginger Milk Frosting was so good, I wanted to eat bowls of it alone. The filling tasted like store bought candy sauce.

A lot of times you see amazing things pinned and then you try them and either they’re a huge flop, a waste of time or just not as easy as you thought it looked.

I was short of some ingredients and I often like to go rogue when following a recipe: I ended up using 1 lb of frozen pineapple instead of 3 lbs, I added in applesauce to try to make up the difference. I used honey, agave, molasses and regular sugar where I was short of light brown sugar. I used nonfat Greek yogurt instead of sour cream. I decorated my cake differently. I used Seven Tiki Spiced Rum because it was all we had on hand. I didn’t use a mixer or processor, I did everything by hand. I made this cake my own.

And there is a certain pride that comes with this.

Perhaps, it is a remnant from my mother’s poor, rural upbringing in Ponce, Puerto Rico, or even my grandmothers’ before her but the thing is you make do, you work with what you have and you waste nothing. You don’t have to follow the rules, they’re are just parameters after all. Resilience, grit, creativity, those are the things my mom consigned to me, as I watched her cook every day from my perch on the kitchen counter as a small child.

As much as she could, she used fresh ingredients, never from a box, and made everything from scratch. It’s ironic to me that this  farm to table/DIY mentality is in vogue now especially with scrappy millennials, affluent hipsters and the Whole Foods/Trader Joe’s folks. I mean my mom saved every jar, plastic tub and button from going in the trash bin because tu nunca sabes.

Not only was I really mindful but I made a serious effort to put everything I had into baking this cake, this labor of love. My mom used to always tell me that the most important ingredient to add to your food was love and lately with all the talk of mindful eating, I’ve resolved to mindfully cook the hell out of this cake.

We have such a deep connection with the food we eat and our memories and senses. It brings to mind, the stories of Like Water for Chocolate where the food was imbued with the emotions of whomever cooked it.

I recall that various tribes of American Indians not only thanked the animals they hunted for sustaining them but also treated and prepared them very respectfully. I’ve always loved this idea, not of thanking some abstract religious figure but the organism who we are actually consuming.

It was hot in the kitchen and we hadn’t put our AC in yet. I hadn’t decorated nor even made a cake in a very long time. It was hard to stack the cake and keep the frosting from melting but it worked out. It was pretty intense but this cake turned out phenomenally.

The birthday boy thought so too. I knew I had done well when he kept repeating how very sweet I was. We broke our pre-wedding diets that weekend with this fabulous cake made from scratch but steeped with love.