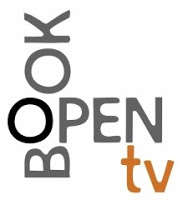 Open Book is a new show about books, which focuses on a single spot on Earth in each episode to introduce you to the writers and other storytellers–musicians, actors, poets and more–whose work reminds us that we’re all connected through the stories we have to tell and the communities we inhabit. The pilot will premiere nationally on LinkTV (DirectTV channel 375, Dish Network channel 9014) on May 13th at 11:30pm EST. A special sneak preview will be broadcast on Monday, May 11th at 8:30pm EST on LinkTV, as well as on New York City’s Time Warner Cable channel 34 at 11pm EST. For additional local cable channels carrying LinkTV, see: http://www.linktv.org/reception