“The Complete Idiot’s Guide to Mary of Nazareth” 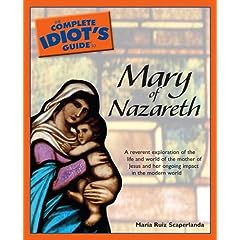 All about Mary of Nazareth

The Bible identifies Mary of Nazareth as the mother of Jesus, thus she
has been given many titles of honor.

Maria Ruiz Scaperlanda of Norman
wants everyone to get to know her namesake as she has: Mother of the Church.
Friend. The first Christian.

In her book, “The Complete Idiot’s Guide to
Mary of Nazareth” (Alpha, $18.95), Scaperlanda has written extensively about
Mary. The book, released earlier this year, presents Mary of Nazareth as the
world’s most popular mother figure.

“I know some people may be turned
off by the title, but to me, it’s perfect,” Scaperlanda said. “I want people to
get to know Mary.”

She predicted many Christians will focus on Mary as
the feature film “The Nativity Story” makes its debut Friday in theaters
nationwide.

“Somebody said we only bring her out at Christmas, but she’s
here all year. She’s an intricate part of the story. She was the one who said
‘yes.’ She is the heart of what we believe in.”

Two Marys point the
way
Scaperlanda, 46, considered it an honor to write about Mary,
particularly since her original contract called for her to write about several
women from the Bible. The publishers of the “The Complete Idiot Guide” series
opted instead to have Scaperlanda focus all of her attention on Jesus’ mother.
And she had just three months to complete the book.

To write,
Scaperlanda drew on her research skills, Roman Catholic upbringing and her
education. She has a bachelor’s degree in journalism from the University of
Texas and a master’s degree in English from the University of Oklahoma. Plus,
she had written several books, including “The Seeker’s Guide to Mary” and “The
Journey: A Guide for the Modern Pilgrim” with her husband, Michael, an OU law
professor. In addition to her books, Scaperlanda is a columnist for Catholic
Parent and Catholic Digest.

Immersed in the project, the Cuban-born
Scaperlanda said she was not surprised to feel a deep connection with Mary. She
said she has felt that way all her life, perhaps because of her roots in
Catholicism. Also, she said, with her Hispanic heritage, where family is very
important and huge gatherings of family members are a tradition, it’s easy for
her to identify with Mary as what she was: a young woman, particularly a young
mother. A mother of four children, now grown, Scaperlanda said she can easily
imagine Mary with her beloved son.

“She was completely human like you
and I. I envision her as a mom — up at night with her baby, rejoicing when that
baby starts to walk, then seeing that child grow and walk in wisdom, which it
says in the Bible.”

Mary’s humanity is a critical element in the
Christian faith story, “but she always points us to Jesus. She wants us to get
to know Him,” Scaperlanda said.

Scaperlanda said she considers Mary to
be the first Christian, “because she was the first one to say Jesus was the
Christ, the son of God.

“Even as frightened as she must have been, she
still acknowledged it. She accepted it.”

Lessons from
Mary
Standing in the sanctuary of Our Lady’s Cathedral in Oklahoma
City, it is as if Scaperlanda is surrounded by the Mary she calls mother and
friend. The stained-glass windows around the church, which show scenes in Mary’s
life, are featured in Scaperlanda’s book.
On a sunny day, Mary’s face beams
as light filters through the windows.

There are many lessons to be
gleaned from Mary of Nazareth — not just for Catholics, but all Christians,
Scaperlanda said.

“She was a regular Jewish girl who did the most
extraordinary thing. We all hear about ordinary people who do the
extraordinary.”

Scaperlanda said seeing “The Nativity Story” may help
people get a glimpse of what it was like for Mary when an angel’s pronouncement
signaled an end to life as she knew it and a new journey of faith.

“How
does she do it? She completely relies on God to show her the way,” Scaperlanda
said.

“She refers to Him as ‘the Most High,’ ‘the Holy One.’ She was
able to get through it because she trusted Him completely. That is my prayer for
everyone, whatever their Christian tradition, or even non-Christians.

“She is a woman who literally changed the course of history by being
part of this plan of God’s. “

It might just be me, but these “idiot” guides have always turned me off. I would never have The Idiot’s Guide to anything on my bookshelf.

One of my favorite college professors told me once, you can tell a lot by how many books a person has in their home, not to mention the quality of those books. I so agree, Dr. Gilbert!