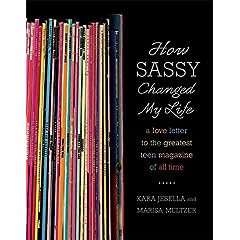 I don’t know, maybe this is giving away my age but who remembers Sassy Magazine? Wasn’t that magazine great? Well, now there is a book all about Sassy and insider going-ons. I love reading tell-all books.
From: http://www.wwd.com/issue/article/111378?page=0
THE SASSY ERA
By Irin Carmon
December 13, 2006
It’s a rise-and-fall narrative of a departed magazine that tapped into the zeitgeist, a tale of a particular cultural moment, and of daring that has since become commonplace. Its progenitors have gone on to more prominent planets of the media universe, and yet they long for those halcyon days. No, it’s not “Spy: The Funny Years,” but rather next season’s media self-obsession: Kara Jesella and Marisa Meltzer’s “How Sassy Changed My Life: A Love Letter to the Greatest Teen Magazine of All Time,” to be released in April by Farrar, Straus & Giroux.
Jesella, a former Teen Vogue editor, and freelancer Marisa Meltzer canvassed former staffers, readers and famous fans about Sassy’s groundbreaking influence. “Sassy and Spy, along with the Village Voice, Spin and 7 Days, were part of a mini revolution that was happening in magazines’ treatment of celebrities in the late-Eighties and early Nineties,” the authors write. But the book is no love-kiss to everything Sassy. Jesella and Meltzer delve into the office squabbles, writing that Kim France, who arrived from 7 Days and is now editor in chief of Lucky, “cried every day her first year at the magazine because she thought Christina [Kelly] hated her.”
Kelly, who went onto edit YM and Elle girl, is credited in the book with setting much of the magazine’s agenda, as founding editor Jane Pratt’s media attention and increasing absence from the office had come to irritate the staff. Pratt is referred to as “the Liz Phair of the publishing world … Openly embracing fame and money has made her anathema to many former fans.”
That includes Jane, the magazine Pratt launched in 1997 and left in 2005, which comes under fire from interviewees who complain that “the spirit of Sassy was one of creating stuff, and the spirit of Jane is consuming stuff.” On the other hand, Lucky, also home to former Sassy-er Andrea Linnett (now Lucky’s creative director), is praised by the authors for taking “a positive approach to the female figure … and a joyful, girlfriend-y approach to shopping,” despite France’s stated worries that she would be accused of selling out. “
It’s more of a real heir [to Sassy] than Jane,” former X-girl designer Daisy Von Furth is quoted as saying in the book. Jane and Lucky, like WWD, are owned by Condé Nast Publications. Overall, though, the book looks on the positive impact of Sassy. The magazine has been heralded for its frank approach to teenage girlhood, and for its cultural prescience in, for example, discovering Chloë Sevigny and running an early Kurt Cobain and Courtney Love cover, even as it struggled with its ownership and resistance from cultural conservatives.
The book reports that, when Sassy was battling a Christian right-led boycott that scared many advertisers away, the late makeup artist Kevyn Aucoin “was working with Maybelline at the time, and told the company he would stop unless they reinstated their ads.” Pratt told the authors that Aucoin “knew that their pulling out was related to the articles the magazine had run on homosexuality.”