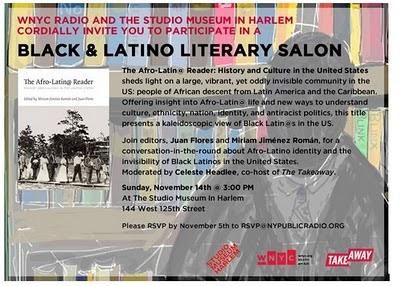 Don’t miss WNYC’s next Black & Latino Literary Salon, a
collaboration with The Studio Museum! The Afro-Latin@ Reader sheds light
on a large, vibrant, yet oddly invisible community in the United
States: people of African descent from Latin America and the Caribbean.

Join editors Juan Flores and Miriam Jiménez Román for a
conversation-in-the-round about Afro-Latino identity of Black Latinos in
the United States.